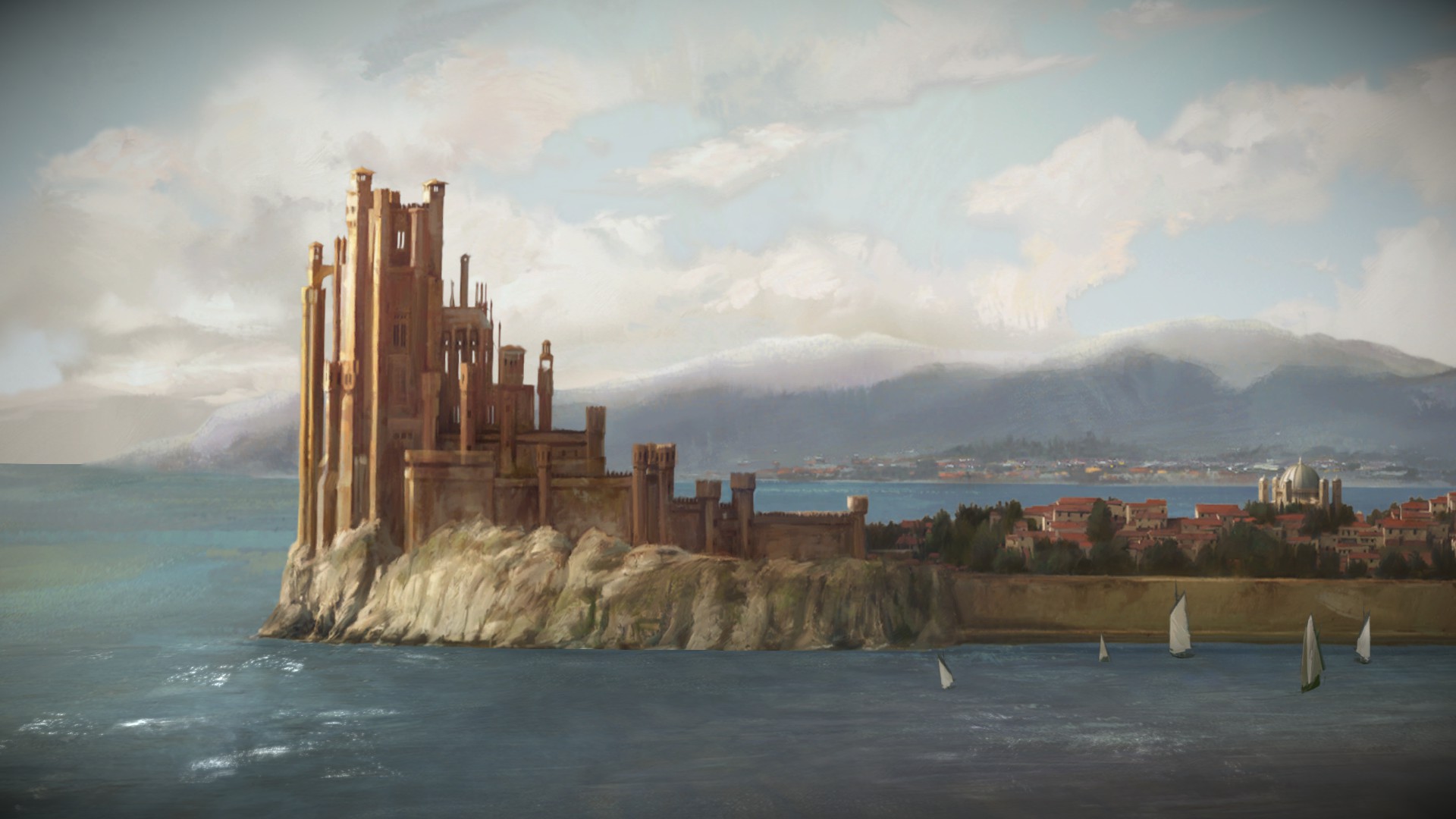 Martin has noted this isn't quite the same as in the books, where it has more of a temperate climate, saying: "King's Landing, that's the capital, is not quite so tropical - in the books it's more like medieval Paris or London.

The map of King's Landing that Tyrion reads in " The Prince of Winterfell ", showing the Mud Gate and southeastern portions of the city click to expand.

The city map from "The Prince of Winterfell" - with names of major locations added to it click to expand.

King's Landing is located on the north bank of the mouth of the Blackwater Rush, and its outline is roughly shaped like a diamond, with a point in each cardinal direction north, south, east, west.

This is because the river mouth flows from southwest to northeast. Many maps simply tilt the viewing angle so that the river is drawn flowing straight across the bottom, with the southeast side of the city at the bottom and the northwest side at the top, and the overall city appears to have a simple square shape.

The city was built around three large hills, named for Aegon Targaryen and his sisters, who founded the city.

King's Landing has seven gates, one in the middle of each of the four walls, and at three of the four corners the eastern corner at Aegon's High Hill has no gate, because it is located directly on the coast, where the river meets the bay.

The Kingsroad begins at Storm's End to the south, and after passing over the Blackwater river, it enters the city through the Mud Gate in the southeast wall, eventually exiting the city through the Gate of the Gods in the western corner though it soon curves north to head to Winterfell and Castle Black.

The Roseroad , which leads to Highgarden , doesn't directly connect to King's Landing, but instead merges with the King's Road just a few miles south of the crossing over the Blackwater.

The only other major road out of the city is the Rosby Road, which exits from the Iron Gate on the northeast side, leading to the towns of Rosby and later Duskendale , the Crownlands' secondary port.

The city is dominated by two primary roads, each of them straight, which intersect in the central plaza of the city.

One runs north and south to connect Rhaenys's Hill and Visenya's Hill, and is therefore known as the Street of Sisters.

The other road runs from Aegon's High Hill in the east to the western corner of the city. While the central plaza is square-shaped, the four road entrances are in each of the corners, not in the middle of the sides.

The Kingsroad actually doesn't directly run to the Red Keep. After entering through the Mud Gate in the middle of the southeastern wall, it continues straight north through the city until it meets with the road from Aegon's High Hill, just east of the central plaza, joining it at a 45 degree angle the portion of the Kingsroad running south of this juncture down to the river is nicknamed the "Muddy Way".

Only the portion of the east-west road located west of this juncture is considered to be part of the Kingsroad, running all the way to the Gate of the Gods at the western corner of the city.

No name has yet been provided for the stretch of the same road which extends east from the point where it joins with the Kingsroad up to Aegon's High Hill.

Royal family members and courtiers visiting the Great Sept of Baelor as they frequently do in the TV series would travel west on the road away from Aegon's High Hill, past the point where it merges with the Kingsroad, then into the central plaza, then turn left to travel south along the Street of Sisters.

Also, there is another major square along the Kingsroad halfway between the central plaza and the Gate of the Gods, known as Cobbler's Square while the western corner is the only one that doesn't have a hill, Cobber's Square is roughly where one would be if there was an equal hill in every corner.

A few other major roads and districts have been mentioned. The River Row runs along the inside of the southeastern wall, near the Blackwater river.

The Mud Gate is located in the middle of this southeastern wall, and as the Kingsroad passes through this gate is crosses River Row, forming a plaza known as Fishmonger's Square.

River Row's eastern end does not directly connect to the Red Keep, because Aegon's High Hill is too steep on its southern side.

Someone in the Red Keep who wanted to travel to the Mud Gate wouldn't want to have to ride all the way down in a straight line to where it meets the Kingsroad near the central plaza.

Therefore a shortcut exists known as "The Hook", beginning halfway up the Muddy Way and curving off east in a semicircle to reach the entrance to the Red Keep on the less steep western side of Aegon's High Hill.

The Riot of King's Landing originated on the Hook, when after seeing off Myrcella at the docks, Joffrey and his royal party were traveling back up this street to the Red Keep though the riot subsequently spread throughout the city.

The Street of Steel begins at the western corner of Fishmonger square, then curves up in a semicircle east-to-west over the outer shoulder of Visenya's Hill, slightly west of the Great Sept of Baelor at the top.

It meets with the Kingsroad slightly west of the main plaza. The Street of Steel is a relatively well-to-do neighborhood where blacksmiths produce armor and swords to sell to knights.

One other major road that runs through the city is the Rosby Road itself, which after entering through the Iron Gate on the northeast side of the city runs in a straight line southwest until it terminates at the central plaza - forming a 45 degree angle with the Street of Sisters.

Also known as "the Bottom", it is physically located at the bottom of the valley between Rhaenys's Hill and Aegon's High Hill.

The slum does not extend all the way up the eastern side of Rhaenys's Hill, but proceeding downwards from the summit, it begins below the Street of Flour, which is the location of many bakeries.

When Arya is hiding in Flea Bottom after her father's arrest, she mentions having to walk down from the Street of Flour to enter Flea Bottom.

In the TV series, the Street of Flour is seen in "Baelor" when Arya attempts to sell the meat from a pigeon she caught to a baker in exchange for a pie.

Apparently the alleys lower down the hill were poorer, because all of the human waste poured into the streets flowed downhill.

Davos explains that he came from the worst part of the slum, Gin Alley, which is located so far down Rhaenys's Hill that it is in the valley between it and Aegon's High Hill, so that all of the shit from the Red Keep poured out of sewage pipes at the bottom of the hill, then down Tanner's Row and past his front door.

In Season 4, Karl Tanner says that he used to be a professional cutthroat and dagger-for-hire in the most dangerous part of Flea Bottom, Gin Alley.

While Flea Bottom is very dangerous, no specific mention of a street named "Gin Alley" has been made so far in the books. The Street of Silk is one of the major red light districts in King's Landing, if not the major one.

It is located on the western side of Rhaenys's Hill, opposite Flea Bottom on the eastern side, and relatively close to the Old Gate.

Many brothels are located here, some of variable quality, but several which are quite upscale and which cater to the wealthy nobility.

In the books, the brothel here that features in the narrative is owned and run by Chataya, a woman from the Summer Islands.

Robert's bastard baby girl Barra was born to one of Chataya's prostitutes named Mhaegen in the TV series.

Bronn also celebrated his new knighthood at Chataya's, and Oberyn Martell was also a customer. In the TV series, most of these events were condensed so that the brothel is actually owned by Littlefinger who does own several other brothels in the books ; it therefore stands to reason that in the TV continuity, Littlefinger's brothel is also located on the Street of Silk, on the northwest side of the city.

Sign In Don't have an account? Start a Wiki. To see the southern knights and their painted armor, and King's Landing after dark.

What I really enjoyed is that the water was so clear that you can see straight to the bottom. There are many places you can stop and just enjoy being in the water.

Kings Landing Memorial Day Weekend. Our family and friends had a great experience at Kings Landing this past holiday weekend.

We were at the main gate at am and were about 10th in line. We were let in and called into the office in an orderly fashion.

Our canoes were launched without incident and the staff that …. 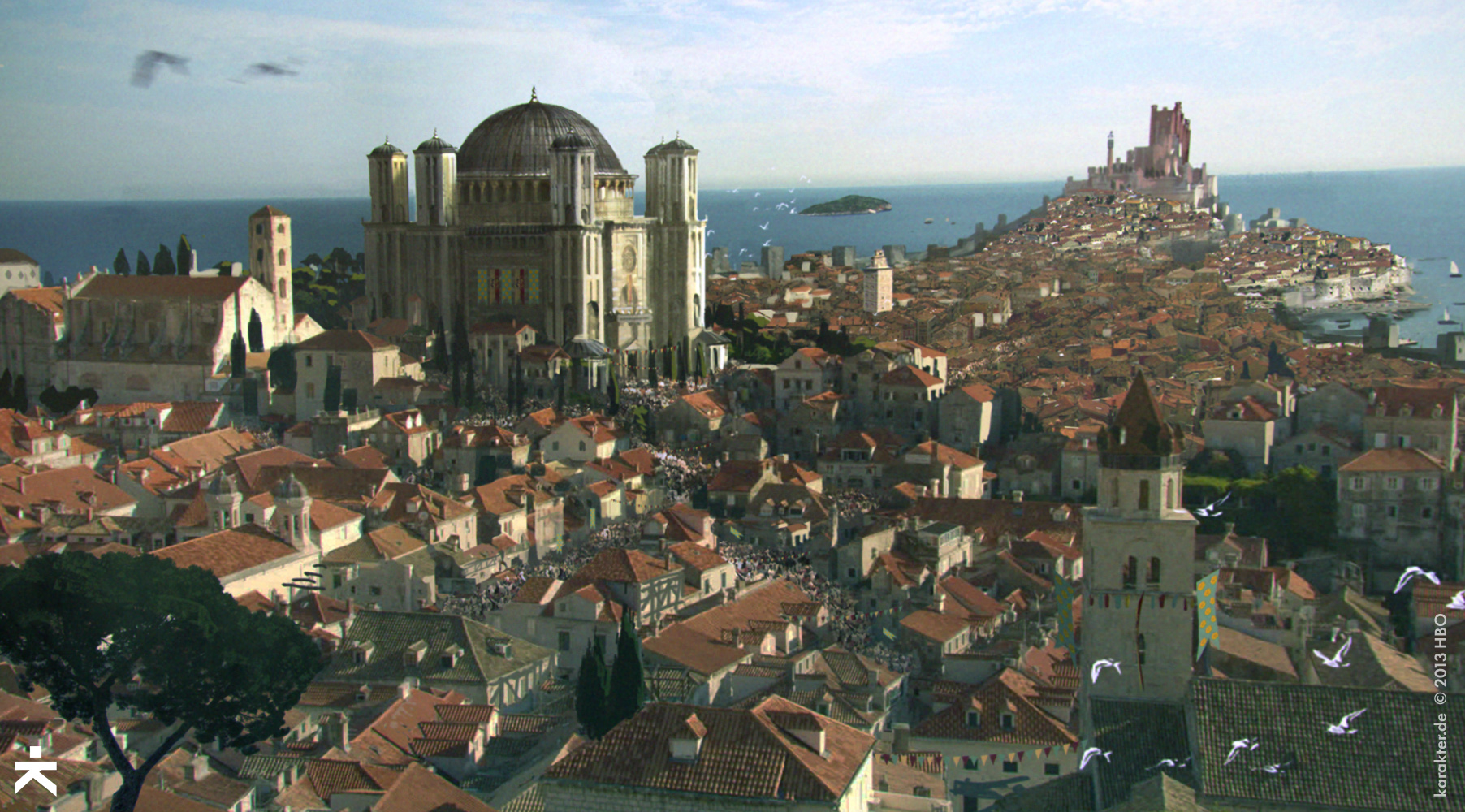